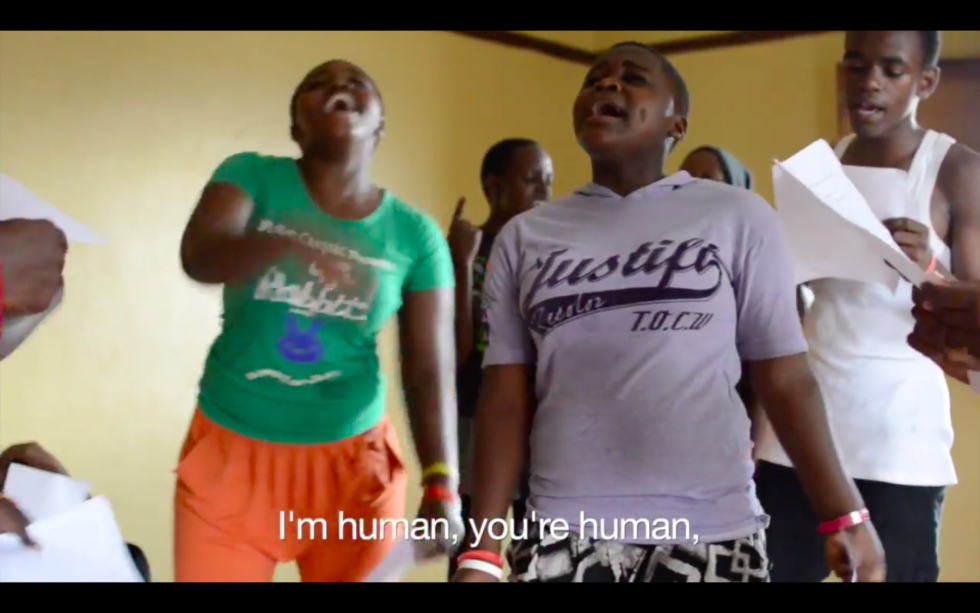 A group made up of HALO youth in Uganda and some of their friends and community members is meeting on a weekly basis at our Learning Center in Uganda. They are calling themselves “Afri-teens” and are mainly focused on dancing, singing, and performing arts. The group is led by Moses Busulwa, a boy from our Bukesa Home in Uganda, and John Aoumu, a mentor from the Bukesa Home. The group has around 20 members and they are great! They’re working so hard on their performances that they’ve been hired a few times to perform at functions around Kampala, the capital of Uganda. They have decided to help out a single mom from the community who has two daughters with the money they’ve raised.

They met the mom through one of their friends who joined Afri-teens. The girl, Agnes, dropped out of school after completing Senior 2 (equivalent to Sophomore year of high school in the U.S.) because the family barely had enough money to eat one meal a day, let alone to pay for school fees. The father is not in the picture and left the woman alone with Agnes, around 15 years old, and Rebecca, around 8 years who also recently dropped out of Primary 2 due to lack of school fees. Agnes and Rebecca start washing cars around 7AM every morning in hopes to earn enough money for food that day.

Agnes began hearing music coming from the HALO Learning Center on Wednesdays and Saturdays and one day, she came to check out what was happening. She discovered the dance group and immediately joined rehearsals. She has become a regular and beloved member in the group. Once the other Afri-teens members found out about her situation, they began using the money they earned at performances to purchase cooking ingredients and other household items for Agnes’ family.

The HALO Learning Center is proud to host the Afri-teens each week and watch as their impact in the community expands.