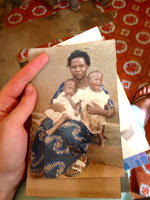 In Uganda there are special names designated for twins. For girls, the older twin is named ‘Babirye’ and the younger twin is named ‘Nakato.’ They are given this special ‘twin’ name in addition to their own first name. HALO supports 2 twin girls in Uganda. Babirye Harriet and Nakato Alice.

I met the twins 2 years ago and got to make a trip to see them again today. Until today I didn’t know the background of how they came to be supported by HALO. When the twins were born their mother passed away within one hour after delivery. The twins father had abandoned them. Without a mother to feed them or a father to provide for them, the twins became malnourished and even now at age 11 are still very small for their age.

A kind woman named Sarah took the twins in when they were only 6 months old and cared for them as though they were her own children. Although Sarah provided tremendous support emotionally for the twins, she was unable to pay the fees needed to send them to school. For that reason, the twins joined HALO’s school sponsorship program to provide school fees for the twins while they continue to be supported by Sarah at home. When visiting Sarah and the twins at their home, I could see she loved them as much as any parent could love their child. Her face lit up when she told me stories about the twins when they were babies, even showing me pictures of them when they were tiny and how she would sleep with one in each arm.

While we were visiting Sarah she thanked me repeatedly but she is the one who deserves to be thanked.

Below is the picture Sarah proudly showed me of her and the twins when she first took them in. 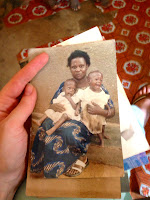 Sarah and the twins today. 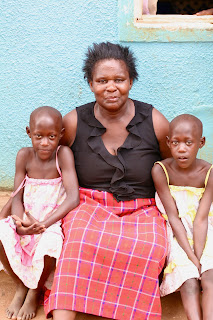