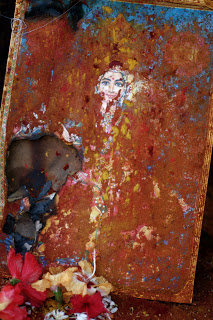 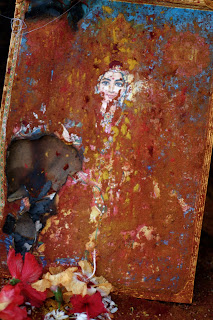 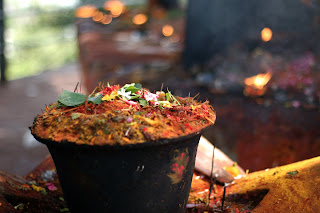 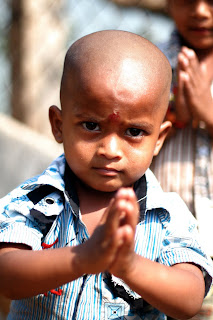 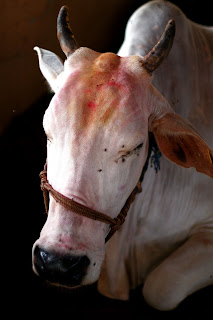 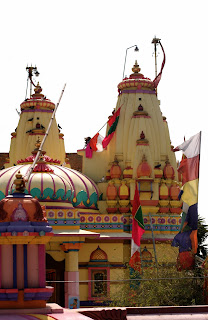 Today is a Hindu holiday in which during the full moon, Hindus have a ritual of swimming in the ocean. We got to visit a nearby temple today, where we passed carloads of people- some hanging off the sides of cars or crammed into the backs of trucks to get to the beach. Because of the holiday, there were also several wedding ceremonies going on at the temple. As soon as we passed one, there was another right next to it.

People were worshiping in different ways all around the temple. In one small part, they were worshiping cows that were adorned with bright colors. In another, many of the people had just shaved their heads to offer their hair as a sacrifice. Even the little babies had shaved heads. There was also a big beautiful tree that people were praying around, adorned with flowers, string, and candles. Once a year in the same town, they even have a Hindu snake festival, where a visit to a snake pit is made to give offerings of various things, like milk and eggs.

On our way back, we passed by a smaller Hindu temple. It was so bright and colorful, I wanted to stop and see it closer. No one was visiting this temple, and the people nearby were kind enough to let me come in to see. Everyone in India has been extremely friendly to me. During our drive to the orphanage, we pass through a tiny little village where there are always people sitting and walking close by the road. It is rare that a car is driving through, so every time we drive by, they notice me and peek in through the windows. This happens on a daily basis, and I wasn’t sure if they liked a western girl coming through their village everyday. I found out they didn’t mind at all, because a few nights ago, when I was at the orphanage, one of the kids came up to me with flowers. It was a gift from the people in the village. They wanted to give me the flowers to put in my hair.
Source: Lacy