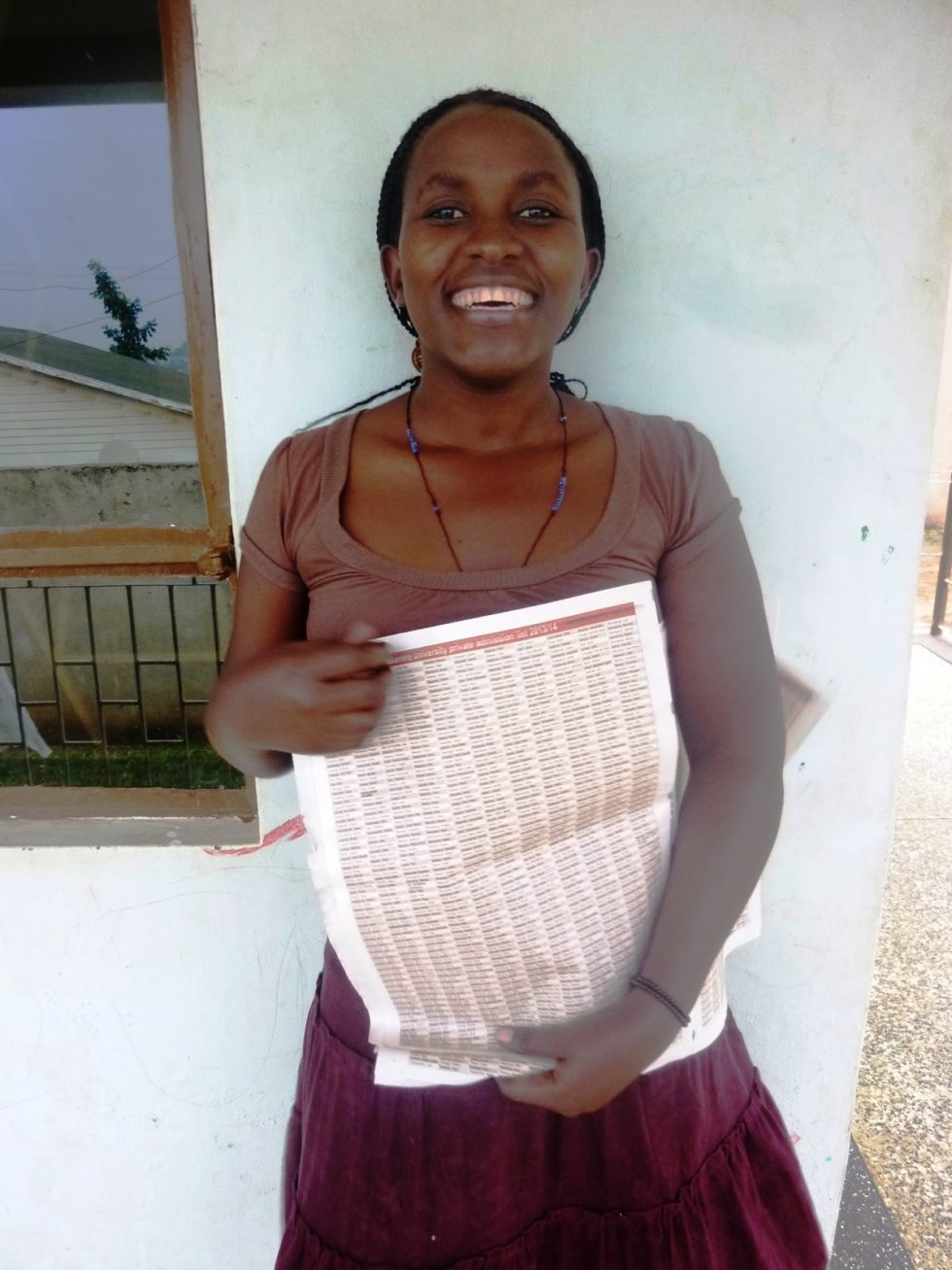 Like so many of the youth in Uganda Stella has had a really hard life but unlike many youth in Uganda Stella was able to find an opportunity that allowed her to rise above her circumstances and succeed.
I am sharing this with Stella’s permission. When I asked her if she minded if I share her story publicly she said no; she said she didn’t mind because she is not ashamed of where she came from and she wants people to know.
Stella has lived in the Mengo home for four years now. She has always been dedicated to her school work, and now her hard work and dedication has paid off. Stella was accepted to the best university in Uganda, Makerere University. She will pursue a Bachelor of Science in Population Studies.
Stella grew up with her mom, grandparents, and siblings in a rural area in Western Uganda. Stella was able to attend school but she lived a very hard life. Her mother struggled to support her and her siblings. When she was in her second year of secondary school her mother was no longer able to pay her school fees, so she went with her brother to search for their father. They found their father but the living conditions were even worse where he lived. The father had multiple wives and too many children to count. He worked in another district so he was never around and left Stella and her brother under the care of his wives. The other families did not accept Stella and her brother in to their lives, so they were neglected and treated very badly. Stella and her brother endured these conditions because they did not know what else to do, but in the end the wives forced Stella and her brother to leave their home. They kicked her out in the middle of the night. Stella had nowhere to go that night so she and her brother slept on the ground in the middle of a banana plantation. The next day they made the journey back to their mother’s home.
Once she was back at her mother’s home an uncle decide to bring Stella to Kampala and pay her school fees. Stella moved to Kampala to live with her uncle and his wife, but the uncle never kept his promise. He continually told Stella he was going to pay for her to go to school and that she just had to wait but he never followed through. While she waited for her uncle to take her to school she was working at their house as a house cleaner. Stella knew her uncle was never going to keep his promise, but she held on to the little bit of hope she had left that one day she would get to go to school again. Then one day she met a girl who was collecting water from the same well. Over time Stella and the girl became friends. Stella told her new friend about her situation. The girl happened to be in contact with a mentor from Cornerstone Development (HALO’s partner). The girl was offered a place in a Cornerstone youth home but she did not want to go because she was already attending school, so she offered her place to Stella. Stella was more than happy to accept the opportunity to go to school.
The next day Stella moved into Mengo home, but at the time (2009) HALO was not yet partnered with Cornerstone, and Cornerstone was not able to take on Stella’s school fees at the time. She just needed to wait until the next year. She was happy to wait. Then in 2010 HALO formed a partnership with Cornerstone and began supporting every child in Mengo home. Finally after a long and difficult process Stella was able to continue her secondary level education. Stella worked very in school and she did well which got her to where she is today, a university student.
Below is an interview with Stella.
What about going to college are you most excited about?
“I am most excited about the fact that I am joining the most beautiful university in Uganda. It is very hard to be accepted there. Even if I’ve not touched the sun at least I’ve touched the stars.”
Are you scared about going to college?
“Not at all. I am very happy and proud.”
What was the hardest part of your journey to this point?
“Before I joined HALO school fees were my stumbling block, and moving long journeys from home to school.” Stella explained that she had to walk very far every day to get to school. She said it was hard to stay late and get there early and the teacher would beat her for being late and not having all her homework.
What was the most joyous moment in your life?
“When I completed Senior 6 (the last level of advanced secondary school) because I never thought I would reach that level.”
What was the saddest moment in your life?
“When I was in Senior 2 and the people (my step-mothers and siblings) I was living with chased me away.”
Was there any point when you thought you might give up?
“Yes, when our father neglected us and didn’t give us anything. I thought I was born by mistake. I thought I was the problem. Our mother struggled so much that we thought maybe we shouldn’t be alive.”
What do you want to do after college?
“I will search for a job so I can support myself and my family. I would also like to continue to get my masters.”
What advice would you give the other Mengo girls?
“Be patient, very, very patient. Think about the future.”